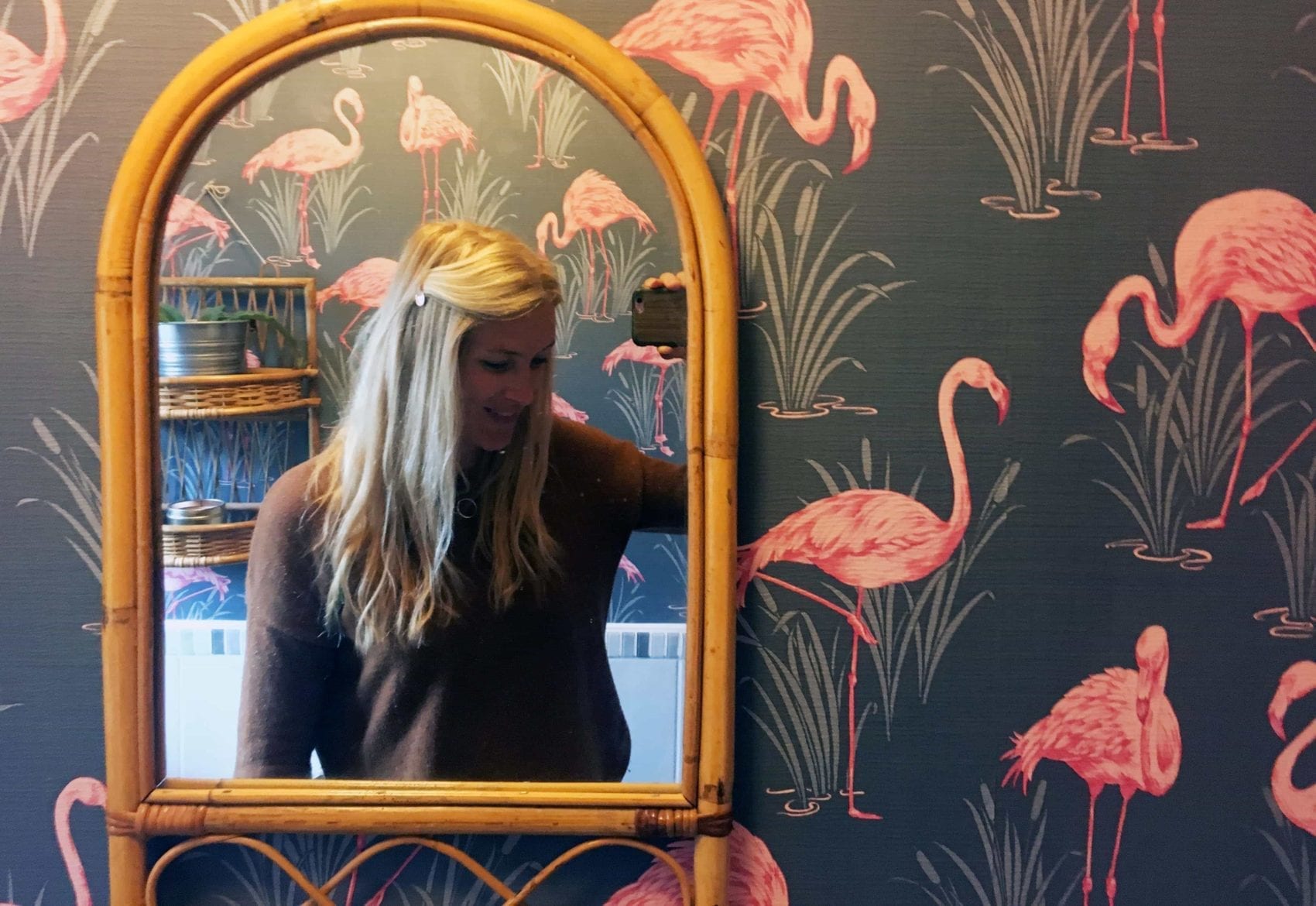 When we found our house it was very much a head and heart buy, and as much as I love our hours now it was definitely stacked in that order. Our home is a 60’s brick box, but it offered the space we needed (the rooms in houses of this age are usually quite generous) and the location was perfect for us. The decor when we purchased the house was unadventurous to say the least (I really hope the lovely lady we bought it from never reads this!) and they must have had shares in magnolia paint. We’ve been her three years now and around the young children I’ve decorated the major rooms of the house mostly (lounge, kitchen to a point, dining room, bedrooms) but I’d not tackled the very functional bathrooms… it was time to take on the smallest room in the house. The downstairs loo.

“Our downstairs cloakroom was a grey paradise.”

Our downstairs cloakroom was a grey paradise. Grey floor, grey tiles with a white suite (that’s just light grey too right?). It has a simple round mirror with classic 90s frosted edging and a mirrors metal cabinet that opened the wrong way requiring you to lean into the toilet to access it.

Typically, I totally forgot to take a picture before I started, so here’s my before photo, but its more a ‘already started making a mess’ shot. 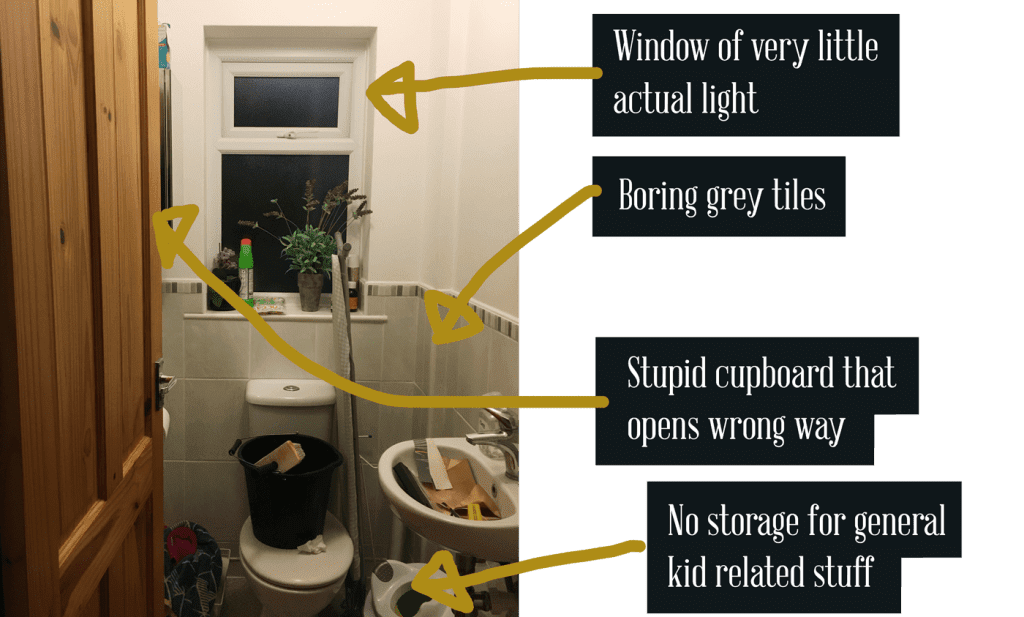 See, I told you it was inspiring!

So I didn’t want to change the tiles in this makeover mainly due to time (I wanted this done over the weekend) but also because they’re not actually that old and I thought I could make them work… I wanted to give the really small space some style, some impact, some…. flamingos! I know its faddy, but I like them (currently) and pink and grey works well, so why not!

I’d seen some lovely flamingo wallpapers online and on Instagram. Below are some of the nicest ones I found at (very) different price points. 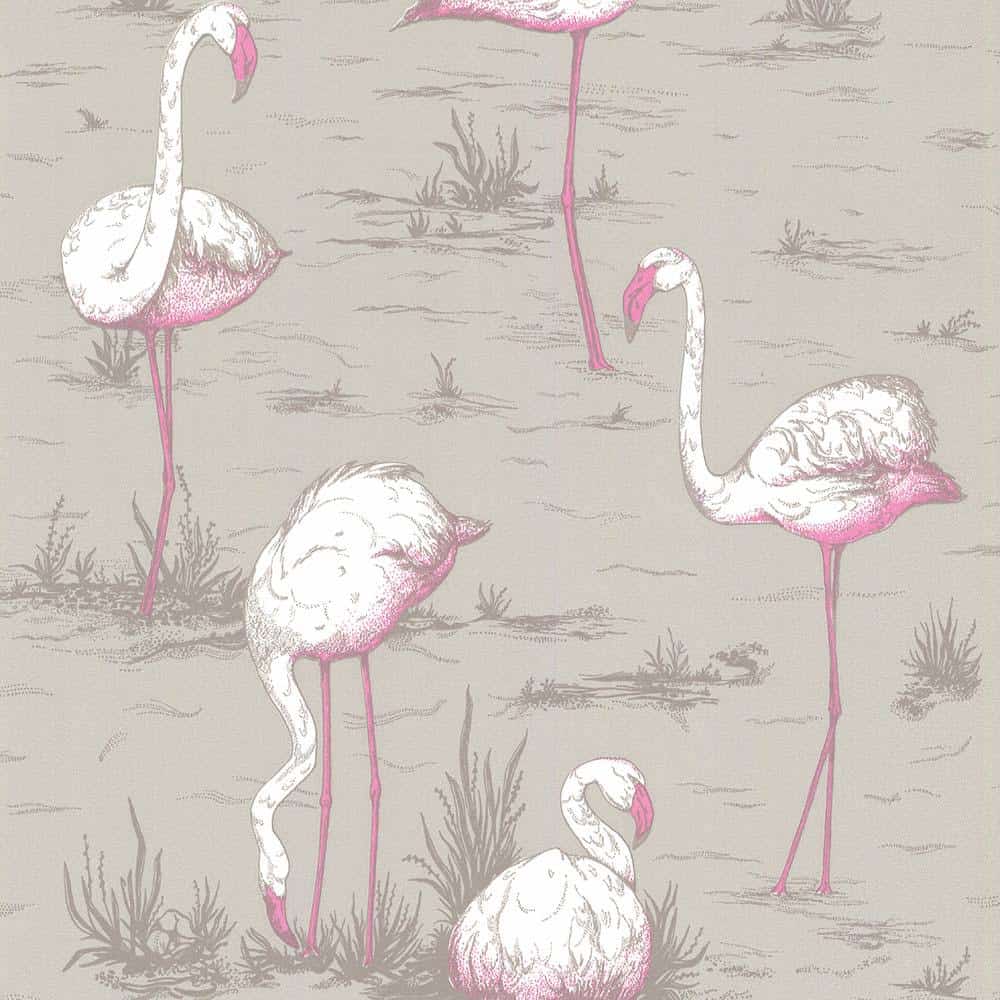 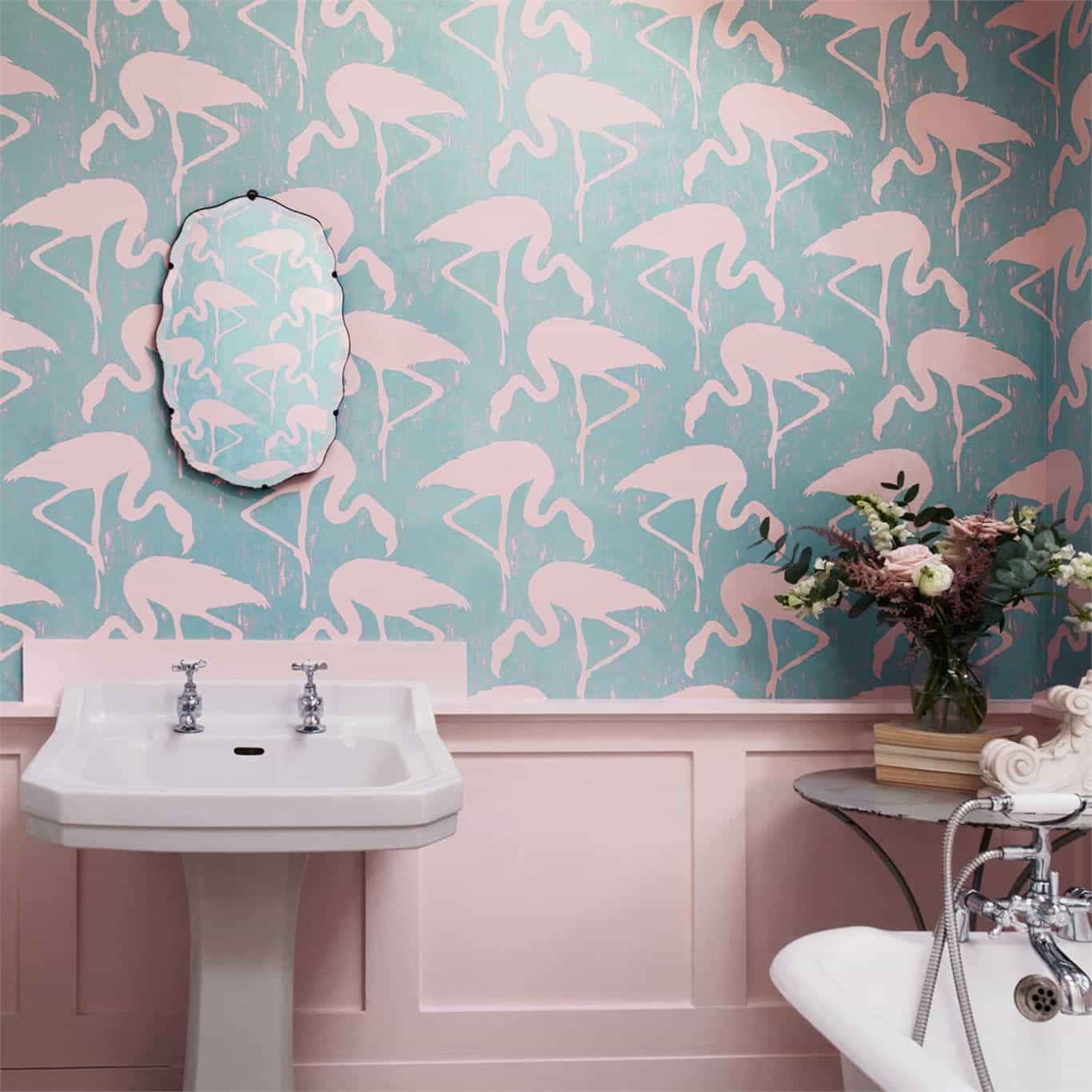 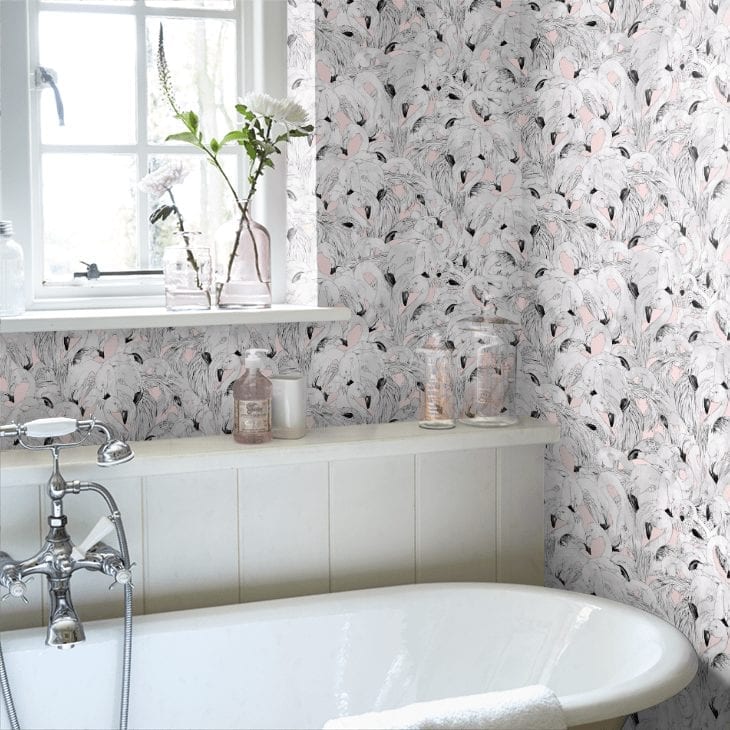 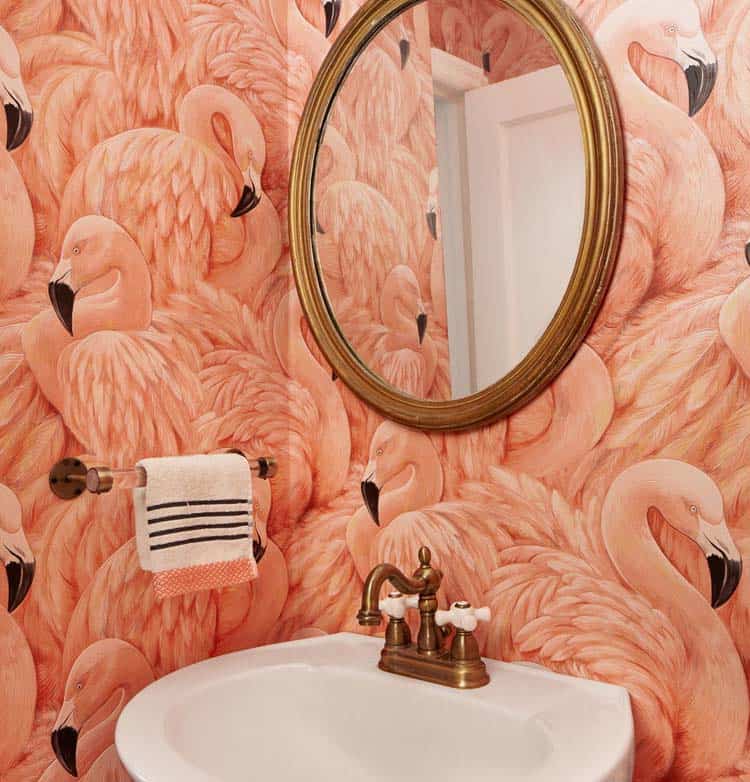 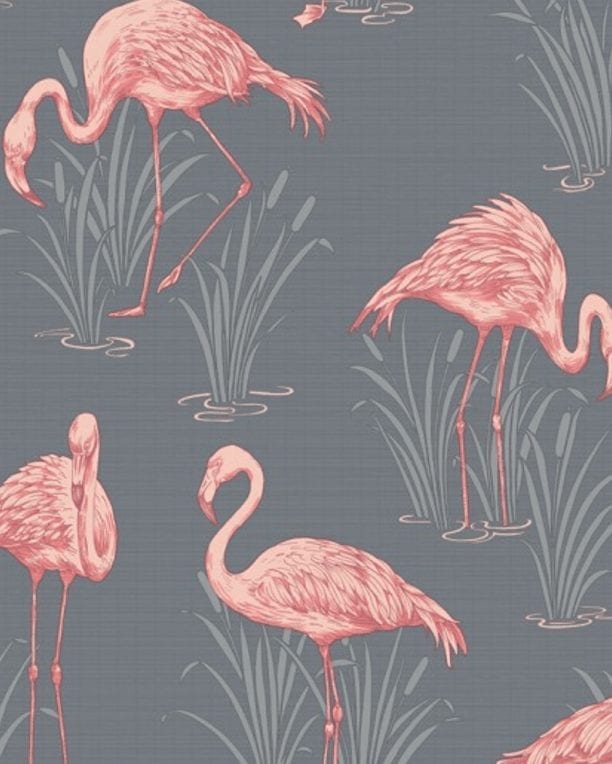 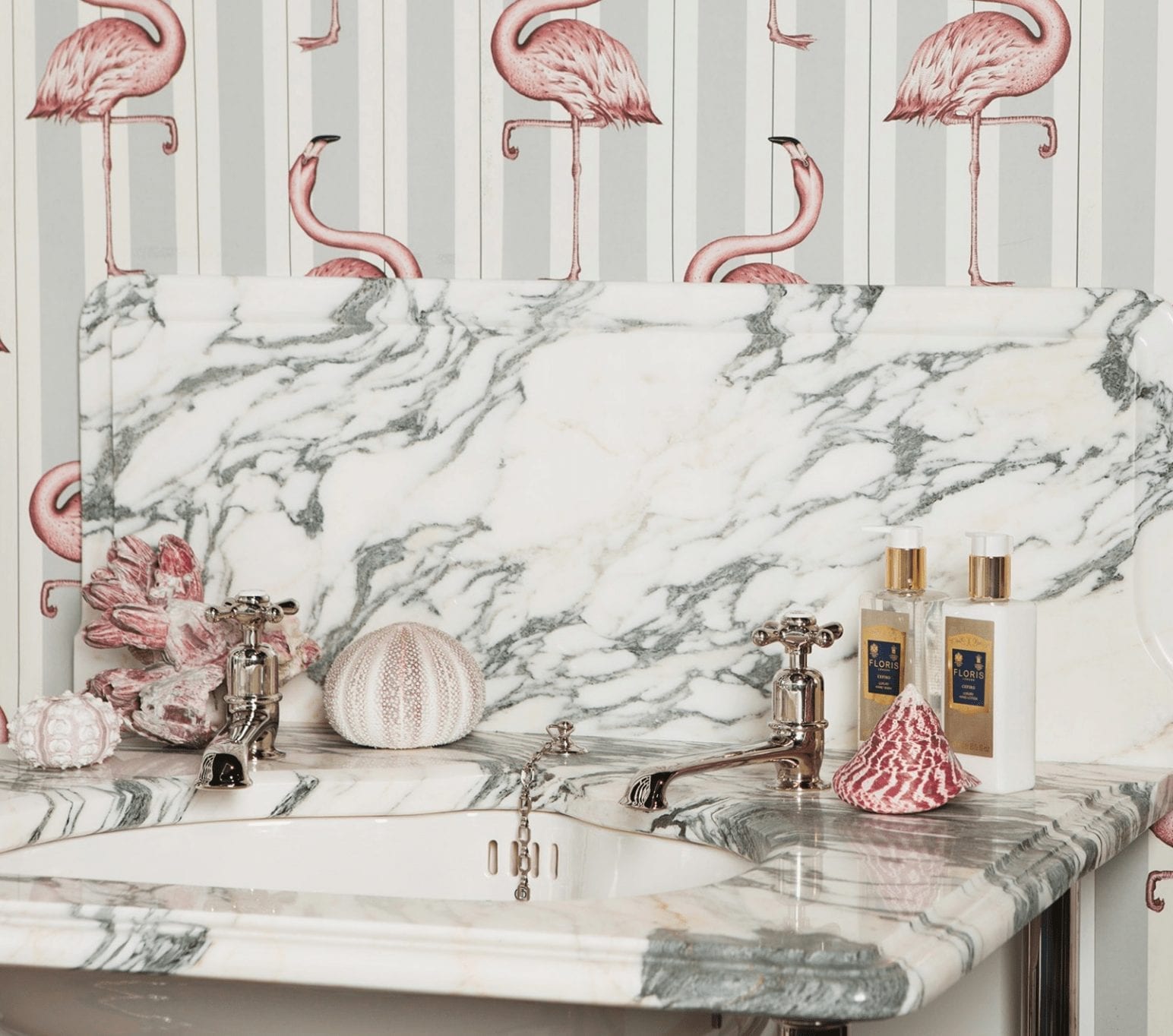 After much deliberation and after deciding that I was doing the wallpapering myself, I picked the Arthouse paper at a very affordable £14.99 per roll. The price was important as I didn’t want to really hate myself when I waste tonnes of length by messing up the measuring or ripping the top whilst standing on the toilet and reaching for the wallpaper brush! 🙂

When it arrived I was really pleased with the quality. It’s nice and thick and has some nice textures that stop it seeming quite flat (and hiding my less than professional wallpapering skills). I then read that it was a ‘paste the paper and let it soak’ type of paper which made my heart sink a little, but I was determined to get it done!

It actually wasn’t that bad to work with. My previous wallpapering attempts had been with the ‘paste the wall’ type which I can confirm is a hell of a lot easier to do! But this one wasn’t as bad as I initially feared…

My downstairs loo has some odd extra reliefs on the wall due to boxed pipework and the incredibly awkward window recess conveniently (not!) above the toilet. So, on probably the hottest evening for ages, I confined myself to the smallest room in the house and began to measure my length and get them attached to the wall, one by one, starting from the door and working round. It then became apparent that the walls were not straight in any way, so I had to be careful to follow my rule lines rather than the ceiling or doorframe line. Four hours later, I emerged a little agitated and hopped straight in the bath to get the wallpaper paste off my hands, arms, face and of course out of my hair.

The next morning I was delighted to see the paper was still on the wall! You can definitely see the joins but I can live with them… 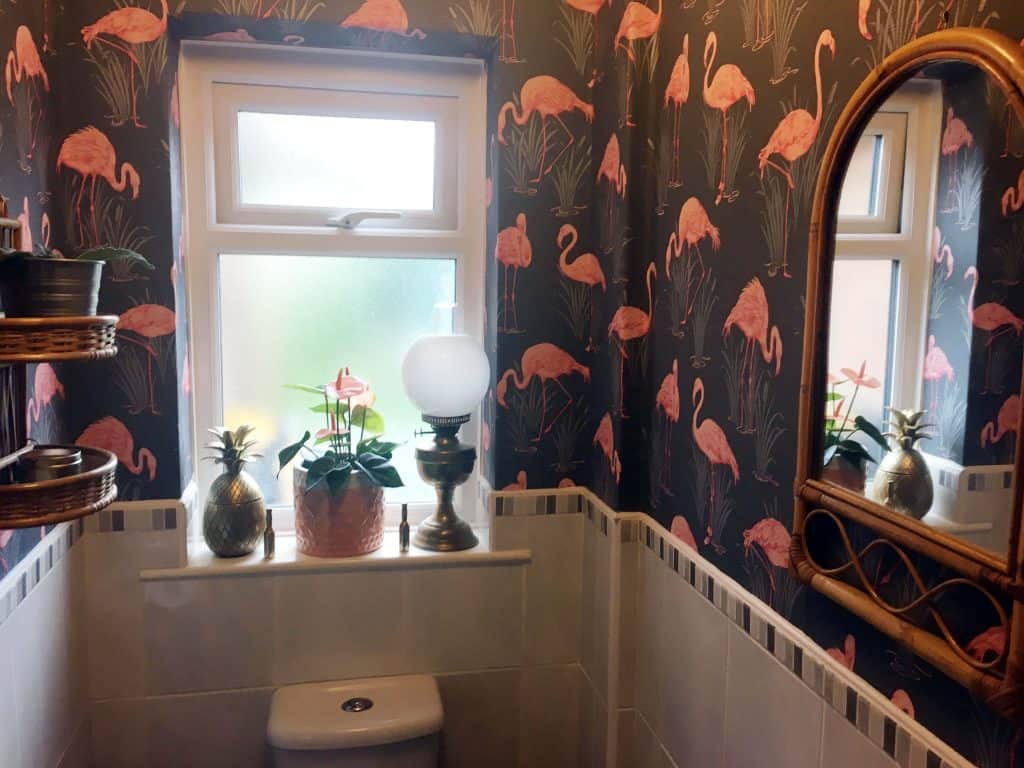 Later that day I went on a pilgrimage to HomeSense, the mecca of cool stuff, bargains and what you can make yourself believe are one-off gems that no-one else will ever find….right? I got myself a lovely weave basket for just £19.99 that would easily hold the collection of potties and wipes etc. I also got a faux plant to sit on the windowsill of doom that has killed so many light-loving plants in the past. I also picked up a nice flamingo-pink hand towel and floor mat for under £15 each. 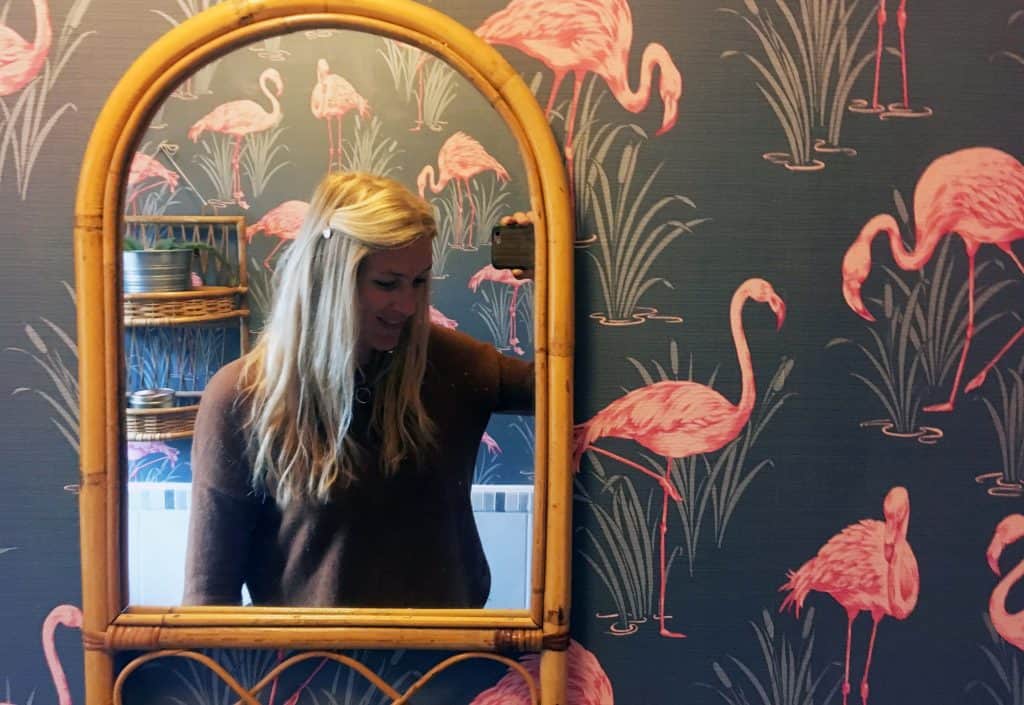 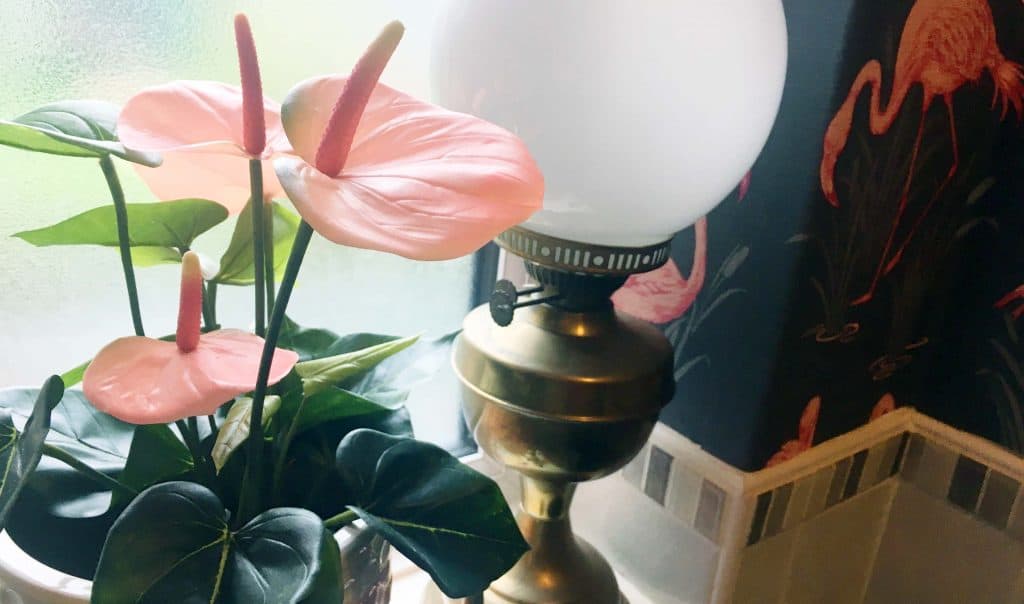 Now for the walls… I’d put aside some bargain bamboo items that I purchased from charity shops over the last few months in hope that I could integrate them into my home – here was my chance! A lovely bamboo mirror and easy-to-hang shelf. I’m so please with them! 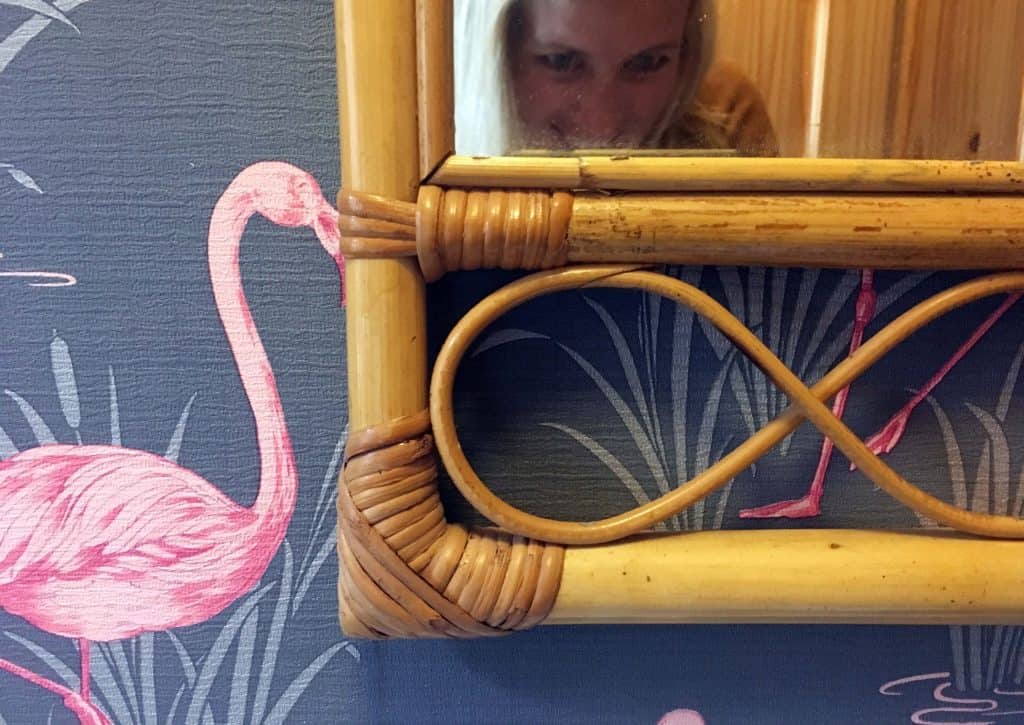 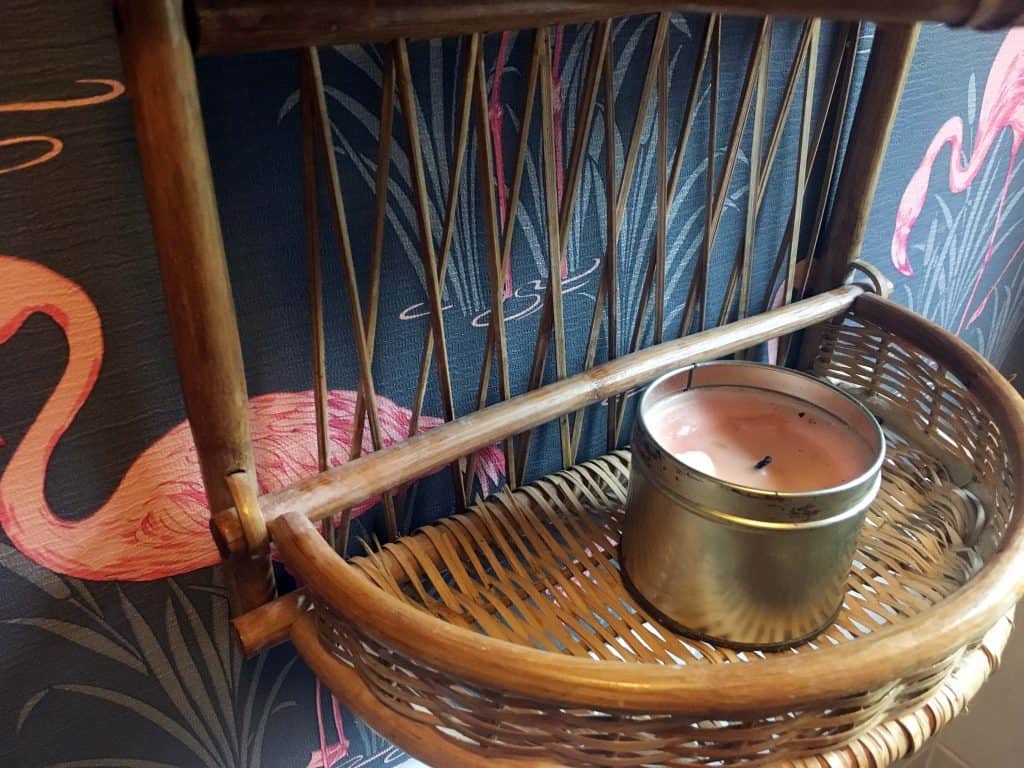 So here you go, from drab to flamingo-fab in a weekend, my downstairs loo… I’m very pleased with it! 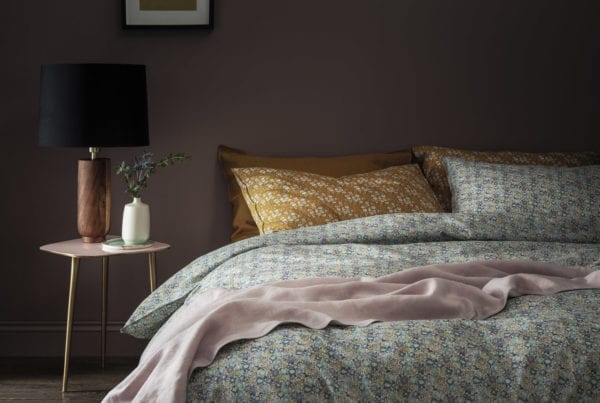 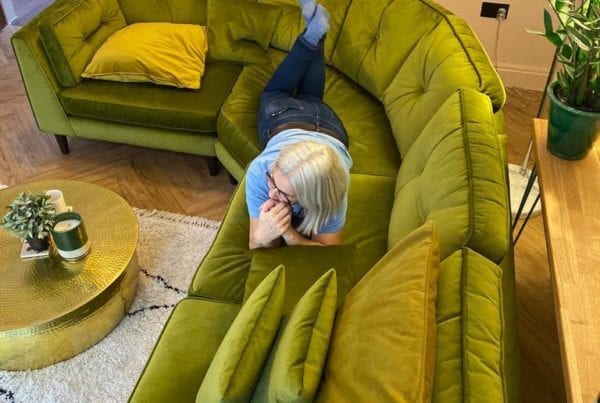 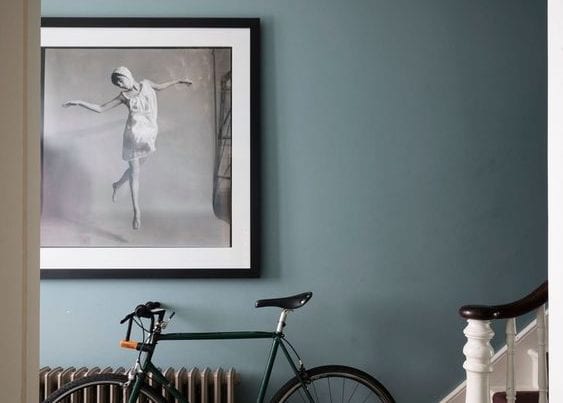 For the Love of Powder Blue